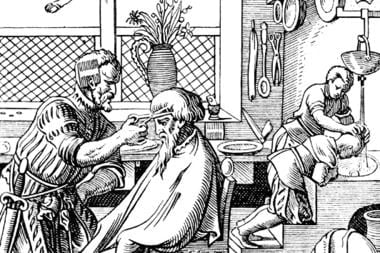 The founders of the development of hairdressing are the ancient Egyptians. They dyed his hair with henna and bleached it, made a perm on the Kalamis iron rod. Men of the upper classes shaved their heads on their bald heads, and women cut their hair short. They did this for hygiene due to the hot climate. Therefore, in Egypt, the famous wigs appeared. The Egyptians were masterly masters in this art, knowing how to create hairstyles of extraordinary beauty and grace. They dyed their hair completely and in separate strands, twisted and braided, used silver and gold hoops, tiaras, ribbons and flowers for decoration.

The ancient Greeks brought the hairstyles to perfect simplicity – the rhythm of the waves, the elasticity of the beam at the back of the head, and the sophistication of jewelry. Greek hairdressers hairstyles from long hair were laid in cone-shaped bundles, the hair above the forehead had waves or small curls.

Ancient Rome showed the world splendor and insane luxury, giving free rein to the fantasies of hairdressers. It was the ancient Romans who began to use hair supplements in the form of curls, hairpieces, etc.

The heyday of hairdressing reached the end of the XVI – beginning of the XVII centuries. The baroque and rococo art styles characteristic of that era were also reflected in hairstyles, which became unusually diverse and intricate. Towards the end of the 18th century, the desire for splendor reached the point where ships, towers, and fruit baskets were built from hair. Such hairstyles on special wire frames were strengthened. This required a great deal of performing skills, so hairdressing academies began to be created.

The true revolution that ushered in a new era in the history of hairdressing was two inventions. In 1882, the Frenchman Marcel Gatliot invented curling tongs. And in 1904, the German Karl-Ludwig Nessler invented a perm that remained on the hair for six months and was called the “permanent”. But the permanent was fully recognized only in the 20-30s of the XX century, when women were able to fully appreciate the convenience and practicality of this service.

In the 60s of the twentieth century, wigs became fashionable again, and hairstyles became more monolithic, using nachos. In the hairstyles there was a tendency to bulk, they lacked small details.

In the 70s, the fashion for wigs and voluminous hairstyles passes, “small” hairstyles with a geometric haircut come back. Begin to wear hairstyles with her hair loose, blond hair freely falling in the wave for a long time become fashionable. Then the natural “hair movement” becomes fashionable.

The development of scientific and technological progress contributed to the fact that changes began to occur in the hairdressing industry, new opportunities in modeling hairstyles and hair care, in improving the products, hairdressing equipment and tools.

Lamination of hair Lamination – popular today service that provides our beauty salons “IRENA” in Riga. Surely you have noticed that the stars of television, girls, […]

Hair Styling Beautiful hair styling is part of an attractive appearance, because most women and girls spend a lot of time creating it. Today, every beauty […]
Load more